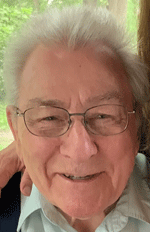 NORFOLK – Graveside services for William C. “Bill” Ryan Sr., 86, a resident of East High Street, Norfolk, will be held in Nashua, NH at a later date.

Mr. Ryan passed away September 26, 2022 with his family by his side at the Samaritan Medical Center in Watertown after a brief stay.

Bill is survived by a son, Michael Ryan and his wife Nicole Ryan of Danvers, MA; his four beloved granddaughters Jessica Ryan, Alexandria and her husband Sean Dutton, Kaelyn and Maisie Ryan, and three great-grandchildren Audrianna Ryan, Windsor and Lincoln Dutton, as well as several nieces and nephews.

Bill is also predeceased by the love of his life, his wife, Patricia Waters Ryan.

Born in Norfolk, NY on January 25, 1936 to Floyd and Marion Gooshaw Ryan, Bill graduated from Norwood-Norfolk Central School, and entered the U.S. Military, being stationed in Guam.

He was married to Sylvia Timson and later Patricia Waters.

Bill and Patricia spent many wonderful years together until her passing in 2011.

While living in Nashua, NH, Bill was a maintenance Supervisor for apartment complexes and later owned and operated Ryan’s Painting for several years.

In his free time, Bill enjoyed traveling with his wife, spending time with his son Michael and his granddaughters, as well as completing small home projects and watching old western films.

In his final years Bill moved back to his hometown of Norfolk, where he enjoyed spending quality time with family including his niece Mary Ellen and his nephew Gary, along with many of his beloved friends in the community.

In his later years he was known as “Mr. Bill”.

Bill will be missed by many, and will be forever remembered for his humor and kindness. Memories and condolences may be shared online at www.buckfuneralhome.com.

The Buck Funeral Home in Norfolk is serving the family of William C. “Bill” Ryan.