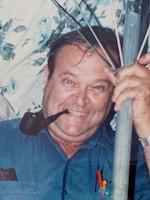 William ‘Bill’ C. Lewis, age 82, of Brasher Falls, passed away on Thursday, November 19, 2020, at Canton-Potsdam Hospital. As he requested, there will be no funeral services or calling hours. Burial will be in Fariview Cemetery at the convenience of the family. Arrangements are under the care and direction of Frary Funeral Home, Ogdensburg.

Bill is survived by his chidlren, Lynda Beckstead and her husband, Paul, of Helena; Lauren Lewis and his wife, Pamela (nee McKinnon) Lewis, of West Stockholm; and Lee A. Lewis of Casselberry, FL; a brother, Jack Lewis and his wife, Nancy, of Scottsdale, AZ; seven grandchildren, Matthew Beckstead, Isaac Beckstead, Benjamin Beckstead, Rachyl Beckstead, Kaitlyn Lewis, Adam Lewis, and Steven Lewis; and many nieces, nephews and cousins. He was predeceased by his parents, Carl and Thelma Lewis; a stepmother, Hazel Lewis; and a sister, Jeanne E. (nee Lewis) Stuart and her husband, Judson.

Bill was born on April 1, 1938, in Potsdam, NY, the son of Carl G. and Thelma (nee Brothers) Lewis. He graduated from St. Lawrence Central School and later from Clarkson College with a bachelor’s degree in electrical engineering. William enlisted in the United States Air Force in 1962 and was honorably discharged in 1966 with the rank of Captain. Mr. Lewis was married to Barbara Powers on July 7, 1962, which later ended in divorce. He was employed as an instructor at SUNY Canton in Canton, NY, and earned a master’s degree in education from SUNY Potsdam during his tenure.

Bill enjoyed painting, playing his guitar, and telling jokes. He ran the Tri-Town Tribune for a number of years and volunteered with the Tri-Town Chamber of Commerce, was a member of the Sherman Hill Drinking Gang and the O.F.C.C. where he was known by the nickname of “Sweet Old Bill” (or S.O.B for short). Before teaching at SUNY Canton, he worked at and later ran Bothwell’s TV Repair and Sales, and in his spare time was also elected to the Potsdam School Board where he served while his children attended Potsdam Central High School.  Donations may be made in William’s memory to Tri-Town Rescue Squad.