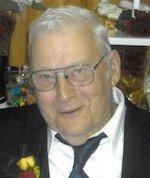 WEST STOCKHOLM -- Wendell D. McCargar, 83, passed away at Canton-Potsdam Hospital on Wednesday, November 24, 2021 after a brief hospitalization. Arrangements are entrusted to Hammill Funeral Home in Winthrop.

Wendell was born in West Stockholm on February 28, 1938, the son of the late Clarence L. McCargar and Reta (Eldridge) McCargar. He graduated from Potsdam Central School with the class of 1956 and enlisted in the U.S. Marine Corps, serving from January 1957 – January 1960. He completed basic training at Camp Lejeune, North Carolina and was a member of the 2nd battalion, 2nd Marines, achieving the rank of lance corporal. He spoke often of his travels to Venezuela, the Philippines, and Greece, and his service during the 1958 Lebanon Crisis.

On September 24, 1960, Wendell married Louise Goodrich at the Brasher Falls United Methodist Church with the Rev. Richard Northrup officiating. They shared a blessed union for over 60 years filled with love and respect until her death in August of this year.

Wendell was a man who placed a high value on family, hard work, loyalty, and country. When the children were younger, many a summer day was spent with the entire family cutting wood for burning in the home during the winter months. He shared his love for the outdoors with his sons and later grandsons, whether it was trips by snowmobile or ATV, hunting, or just spending time at his camp. During his later years, he found great joy in working on small engines.

Wendell is survived by his sons and their wives, Dr. James and Dr. Nita McCargar of Wadsworth, OH, Robert McCargar of Newark, DE, and Jared and Maureen McCargar of Hopkinton; five grandchildren, Ryan, Nalini, Arora, Samuel, and Carson; and many nieces and nephews. He was predeceased by his sisters, Betty Hughes and Eleanor (“Ellie”) LaBrake; and brothers, Orin, Clarence, Jr. (“Booter”), and Judson McCargar. He was a member of the Marine Corps League, Massena Detachment and the Chapp Hill Hunting Club of South Colton.

Relatives and friends are invited to attend visitation on Monday, November 29 from 10 a.m. - 12 noon at the Knapp Station Community Church, 3035 County Route 47, Norwood, NY 13668. The funeral services will follow at 12 noon at the church with lunch to follow.

Memories can be shared with her family at www.hammillfh.com.