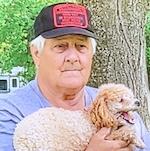 LISBON -- Wade J. “Butch” James Jr.,70, died on Wednesday, April 8, 2020 at the Claxton-Hepburn Medical Center, Ogdensburg, a result of complications of this horrible Corona Virus; he had been a patient since March 29, 2020.

Butch was born in Utica, New York on November 15, 1949, a son of Wade Sr. and Margaret (Morin) James. He attended Canton Central High School prior to being drafted to the Army in June 1969, serving a tour in Vietnam before being honorably discharged in March of 1971. Following his return from service, Butch worked for Witherbee & Whalen for many years.

Growing old is no more than a bad habit which a busy man has no time to form. Butch kept himself young by loving the game of living, which was manifested in his many interests. He was a very accomplished softball player, card player, bowler, fisherman, deer hunter and mink and beaver trapper. Butch was a berry-picker extraordinaire, gifting many to his family and friends. Additionally, his time and efforts turned toward woodworking. Many a child has enjoyed an appropriately sized Adirondack chair; created by Butch. He handcrafted and gifted many toy chests inscribed with children’s names for each to cherish. He loved children and they returned his affection. Butch relished seeing kids laughing and happy, playing and rough-housing with them. Indeed, Butch kept old age at bay with his varied interests and achievements, yet, above all, his love for his wife Joyce and sons, Jeffrey and Devin he would rate as his most enduring attainment.

Butch is predeceased by his parents, Wade Sr. and Margaret James-Daniels and by his step-father, Charles Daniels.

Butch will be honored by a memorial service with Military Honors at a time to be announced, once daily life returns to “normal” and this horrible pandemic had released its grip on society.

Fond memories and condolences are encouraged to be shared online at www.olearyfuneralservice.com. Arrangements for Wade J. “Butch” James Jr. are under the care of the O’Leary Funeral Service of Canton.