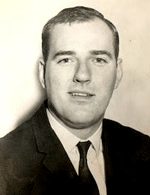 MASSENA — Victor “Vic” Burnett, 78, of Massena passed away on Monday, August 1st, 2022 with his loving wife and children at his side.

He was born at home in Brasher on November 4th, 1943, to the late Raymond and Dorothy (Jock) Burnett.

He graduated from St. Lawrence Central High School in 1961, and went on to marry the love of his life Ella Jane LaComb on September 4th, 1965.

Vic worked several jobs during his life, including managing P+C Foods, and most notably, working for the Town of Lawrence as a Town Justice, a Councilman, and Town Supervisor for almost 40 years.

He was an avid lover of animals, especially dogs.

Arrangements are entrusted to Hammill Funeral Home in Winthrop where visitation will be held on Monday, August 8th, 2022 from 1-3 PM.

Words of comfort and condolences can be shared with Victor’s family at www.hammillfh.com.