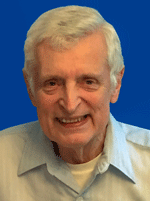 ROCKVILLE, MD — Thomas Morrell Wade, IV, a devoted husband and father, died peacefully at home in Rockville, MD, surrounded by loved ones, on January 14, 2023. He was 88.

Born and raised in Louisville, KY, he graduated from Male High School, and attended Washington and Lee University in Lexington, VA, then Carnegie Tech (now Carnegie Mellon University) in Pittsburgh, PA, graduating with a bachelor’s degree in chemical engineering. He also attended graduate school at the University of Louisville.

He and his future wife, Ellie, met as children in Louisville, where they lived only blocks away from each other, in Audubon Park. Ellie’s best friend was his sister, Mary Beverly. Ellie and Tom were happily married for more than 67 years.

Tom began a successful 35-year career as a chemical/industrial engineer for Reynolds Metals in 1959, helping to open the Reynolds Aluminum Reduction Plant in Massena, NY. After his retirement from Reynolds in 1994, he and Ellie returned to his childhood home in Louisville.

Then, in 2009, they relocated to Rockville, MD, to be closer to family in the Washington, DC area.

In Massena, Tom played in men’s softball and bowling leagues, and was the key founder of the first Girls Softball League. He thoroughly enjoyed coaching and umpiring girls’ softball for many years.

Additionally, Tom was an avid genealogist, chronicling the family’s ancestral lines back to the 7th century A.D.

Additionally, he is survived by eight grandchildren: Nate, Cassie, Evan, Carly, Ellie, Laryssa, Noel, and Nick, as well as one great granddaughter, Olivia.

A funeral service at the church where Tom and Ellie were married, Fourth Presbyterian Church of Louisville, 3016 Preston Hwy, will be held at 11 a.m. on January 27.

Visitation begins at 10 a.m. A private burial will follow at Cave Hill Cemetery.

In lieu of flowers, donations in memory of Thomas M Wade, IV may be made to the National Genealogical Society (ngsgenealogy.org/donate).