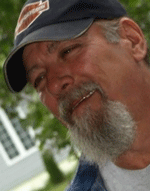 Family and friends are invited to share in a Celebration of Life at the Loyal Order of Moose Lodges in Massena, Saturday November 12th, 2022 at 2:00PM.

Tom was born in Buffalo on November 17th, 1957 to Thomas Krise Sr. and Iretta Kingston.

Thomas was briefly in the US Army, and then went to work at General Motors for over 32 years.

He relocated for work many times, to Oklahoma, Indiana and Michigan, but always returned home to the North Country.

When he wasn’t on his Harley, his other ride was a school bus.

Less than a year after retiring from GM in 2008, Tom worked for Brasher Falls Central School District as a Bus Driver until 2017.

Tom was a past coach for the Tri-Town Timber Wolves Football Team.

Over the years he coached for his daughter and then for his grandchildren’s sports, such as lacrosse and hockey.

He also was a Pack Leader for the Cub Scouts in Massena, and a member of the Northern New York Lawn Mower Racing, often helping with the Lawn Mower Races.

He was happiest with a wrench or hammer in his hand, always doing or fixing something, rather it be mechanics, construction, or just lending a helping hand.

Those close to him knew that all you had to say was, “Hey Papa, I need help.”

Thomas is survived by his daughter; Amy and Shawn Durham, his mother; Iretta Krise, his girlfriend; Lynn Brown, his siblings; Paul and Kathy Krise, Cheryl and David Whisenhunt, Sherry Armstrong, Shelly Krise and Ralph Krise and his grandchildren; Colton, Cheyenne andn her husband Todd, Donivon, Jakob and Bentley, as well as many other adopted grandchildren. His father Thomas, his wife Karen Krise, and a granddaughter; Audrey, predecease him.

Memories and condolences can be shared with the family at www.hammillfh.com