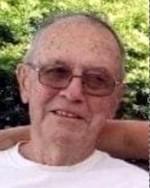 Thomas C. Flanagan, age 83 of Richville NY, passed away on Saturday (November 19, 2022) at Claxton Hepburn Medical Center. As per his request there will be no funeral services. Arrangements are with the Fox & Murray Funeral Home.

He was predeceased by his wife, Nancy in 2015; a daughter, Terry & her husband Paul Ritzentaylor; three sisters, Louise Frere, Mary Barrigar & Myra Winthrup; and a grandson, Luke Ritzentaylor.

Tom was born on October 2, 1939 in Stockholm NY, a son of the late Harold & Mayfred O’Ber Flanagan. He graduated from High School and enlisted in the United States Marine Corps from 1957 to 1960.

Tom worked as a machinist for Delco Products (General Motors) in Rochester for 32 years, and then did land clearing for Kildare in Tupper Lake, and then farmed for Roland Moore. He was an avid outdoorsman who enjoyed mountain climbing, especially in the Adirondack where he mastered all the peaks, white water rafting, visiting national parks, hunting, fishing, snowmobiling, snow shoeing and skiing. He was also a member of the Sylvan Falls Sportsman Club.

Memorial contributions can be made to Toys for Tots. Condolences and fond memories can also be shared online at www.foxandmurrayfuneralhome.com.