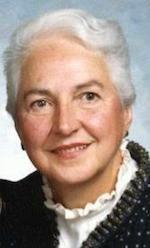 Born in Malone on September 26, 1926, she was the daughter of John M. Coughlin and Mayme Clara Perrin. She graduated from St. Joseph’s Academy, Malone in 1944.

She attended Business School, and then worked for Sears & Roebuck and Niagara Mohawk in Malone. In later years she worked as a secretary in her husband’s Law Office in Brasher Falls.

On December 31, 1949, she was married to Ethan K. Phillips in St. Joseph’s Church in Malone with Rev. Julian P. O’Brien officiating.

Theresa was an active member of the community, serving as a member of the Brasher Falls Central School Board of Education, a member of the American Legion Post #514 Women’s Auxiliary in Winthrop for over 50 years, and served as a Republican Chairperson for the Town of Lawrence.

Theresa’s commitment to her Catholic faith was clearly evident throughout her daily life. She was a communicant of St. Patrick’s Church in Brasher Falls, a member of the Altar and Rosary Society and the Parish Council. She also served as a Eucharistic Minister, Church Greeter and Lector. She completed a 2-year Formation For Ministry Program in 1997. Theresa also was involved in the Light Up Catholic Youth (LUCY) Project, and the Gabriel Project, where she helped with flyers and prayers. She also taught Religious Education Classes. In 2007, Theresa made a generous donation to the St. Patrick’s Parish, which initiated the establishment of a “Parish Center Renovation Fund”. She also gifted the statue of St. Patrick, which is displayed on the front lawn of the church in memory of her late husband.

Due to social restrictions we are unable to gather at this time but will hold a graveside service at the convenience of her family at St. Patrick’s Cemetery in Brasher Falls. Arrangements are entrusted to the Hammill Funeral Home in Winthrop. During this time of social distancing, please take a moment to connect with Theresa’s family on her Tribute Wall at www.hammillfh.com.