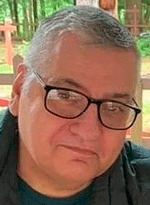 Born in Gouverneur, NY, Terri was the son of W. Maitland and Gladys (Selleck) Thompson.

He attended Clarkson College of Technology from 1971 to 1973.

In 1977, he graduated from Seaway Baptist Bible Institute.

He supplied the pulpit for many local Baptist Churches.

After working for nearly twenty years at Tru-Stitch Footwear, Terri retrained and earned a degree in accounting, graduating in 2000 from Plattsburgh State.

He was predeceased by his parents; his in-laws, Harlow and Leona Holland; a sister-in-law, Grace Holland; and a brother-in-law, Jack Bishop.

A funeral service will be held at the Chateaugay Funeral Home on Monday, November 21, 2022 at 11 a.m. with Pastor James Noreau of Anchor Baptist Church, Potsdam officiating.

Burial will be held in Eastside Cemetery, Chateaugay.

Donations in Terri’s memory may be made to Anchor Baptist Church, Potsdam.

Online condolences may be offered at www.chateaugayfuneralhome.com.