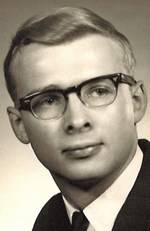 OGDENSBURG — Stephen “Steve” Pask, 73, passed away early in the morning on June 10th at his place of residence at St Joseph’s Nursing Home in Ogdensburg, NY.

He was surrounded by family and friends in his last days.

Arrangements are under the care and guidance of the Phillips Memorial Home, 20 Church Street, Madrid, NY.

Calling hours will be held on Wednesday June 29th 1pm-3pm at the Phillips Memorial Home, Madrid, NY followed by a prayer service and military honors.

A light reception will be held following the service.

Steve was born November 19th 1948, the son of the late Francis and Lorna Pask.

He grew up in Potsdam and graduated from Potsdam High School.

Steve attended (SUNY) Canton Agricultural and Technology College, as well as North Country Community College, before working in the IBEW (local 910) as a union electrician for 40 years.

He proudly served his country in Vietnam as an infantryman in the US Amy, where he was awarded bronze stars and a purple heart.

Steve enjoyed hunting, riding his motorcycle and walking with his pets, most notably his cat, Marmalade, who would follow him through the woods.

He put great effort into staying connected with family and friends and was very passionate about his grandchildren, Kinley Rae and Corrigan Michael Andrew.

Steve was regarded as a character by friends and colleagues and was known to show up for a friendly visit- often unannounced.

A jack of all trades, Steve wasn’t afraid to work on anything, even if it wasn’t exactly that safe.

However, he was adamant about wearing eye protection.

He is survived by his sister, Dianne Taillion and her husband, Bob Taillon, Madrid; his son, Dana Pask, Buffalo; son, Kevin and wife, Danielle Pask; and his grandchildren, Kinley and Corrigan Pask, Norwood.

In addition to his parents, he was predeceased by his sister, Sylvia Dunkin of Texas.

A special thanks is in order to all members of the St. Joseph’s Nursing home staff for their special care provided to Steve and their kindness and friendship.

In Lieu of Flowers donations can be made in Steve’s memory to the Potsdam Humane Society or Wounded Warrior Project.

Friends and family are invited to share on line condolences and memories at www.PhillipsMemorial.com.