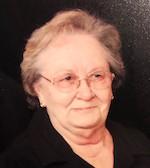 MASSENA –- Stella B. Larrow, 84, a resident of Liberty Ave, passed away unexpectedly on Tuesday, November 23, 2021 at her home.

Stella was born on January 31, 1937 in Massena, the daughter of the late Jacob and Helen (Opal) Rog and attended school in Massena. On August 6, 1955, she married Bernard H. Brault. They were blessed with 5 children however the marriage later ended in divorce. On February 2, 1985, she married Stanley Larrow at the First United Methodist Church with Rev. Stanley Brown, officiating. He sadly predeceased her on December 31, 2000.

Stella was a dedicated wife and mother, raising her children. While raising her children, she went to work at Fay’s Drugs in Massena as a pharmacy technician, retiring after 22 years of service. She was a former member of the Women of the Moose #1110 and enjoyed doing crossword puzzles, flower gardening, and traveling.

Stella is survived by her children and their spouses, Sandra and Charles Henson of Littleton, Colorado; Randy Brault, Kevin and Janet Brault, Annette and David LaGoy, and David and Sandra Brault, all of Massena; her step children, Gary and Linda Larrow of Winthrop; and Sharon Eiler of Florida; her grandchildren, Nicholas Henson, Victoria Henson (Miles Keeney-Ritchie), Taylor (Brandon) French, Kaulin Brault, Jacob Losey, Jade LaGoy, and Jenna and Emme Brault; and 6 great grandchildren.

She is also survived by her brother-in-law, Everett Van Patten of Waddington and a sister-in-law, Darrelle Rog of Vancouver, Washington; and many nieces and nephews.

In addition to her parents and husband, she was predeceased by a granddaughter, Kristin LaGoy; her sister, Barbara VanPatten and her brother, Edward Rog.

Friends may call Friday 11-1:00 PM at the Donaldson Funeral Home, Massena, where a funeral service celebrating her life will be held at 1:00 PM with Deacon Tom Proulx, officiating. Burial will follow in Calvary Cemetery, Massena.

In lieu of flowers, those wishing may consider memorial donations in her memory to be made to the American Lung Association.

Memories may be shared and condolences offered online at www.donaldsonfh.com.