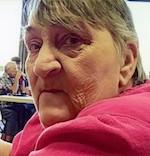 Shirley was born March 8, 1945 in Massena, the daughter of the late Stanley L. and Ethel (Mitchell) Rafter. She attended St. Lawrence Central Schools and later graduated from Mater Dei.

Shirley worked for many years for the Massena Neighborhood Center. She later became a driver for AAA Limousine Service and Econo Taxi. She enjoyed playing cards, bingo and reading.

Shirley is survived by her children, John Sabin of California, George Sabin of Georgia, Trina Allman of Arizona, and Sonya Allman of Massena; her grandchildren, JD, Dillion, and Joannie LaTray, Stacy LeClair, Ashley and Eric Shuck, Angel Waltz, and Tyler; many great-grandchildren including, Drake, Sawyer, Ally, Zane, Zander, Zayla, and Zavier; her sisters, Ruth Goudie of Massena, Phyllis Griffin of Brasher, and Beatrice Castle of Massena; her brother, Mike Rafter of Massena; and many nieces and nephews.

In addition to her parents, she was predeceased by a sister, Margaret Gibbs and her brothers, Roger, Robert, Louis, and Roy Rafter.

At her request, there will be no services. Arrangements are with the Donaldson Funeral Home, Massena, where memories and condolences may be shared online at www.donaldsonfh.com.

Memorial contributions may be made in her memory to the Massena Neighborhood Center.