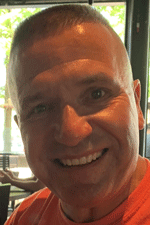 MASSENA — Mr. Scott F. Rogers, 58, passed away on September 28th, 2022 at McClure Miller Respite House in Colchester, VT with his wife by his side.

Scott was a graduate of Massena Central School in 1982 and continued his schooling at Mater Dei where he received his Associates in Applied Science degree for Ophthalmic Dispensing.

He worked as an optician until 1992 when he joined the force of the Village of Massena Police Department.

Scott was proud of the work he did as part of the team that created the K9 unit for MPD. His years as a K9 officer were certainly his favorite of his career.

After his retirement from MPD he also worked for the United Public Service Employees Union and the Town of Norfolk Police Department.

Scott’s greatest accomplishment and source of strength was his children.

His determination that he exhibited during his long fight with cancer was extraordinary and derived from his love of his family.

He defied odds that are unexplainable and miraculous.

Scott volunteered on the Rose Hill Board of Directors and the Massena Minor Hockey Board for several years and was current a member of the Town of Massena Planning Board, Seaway Valley Modelaires, Benevolent and Protective Order of Elks, and the Massena Exempt Firemen’s Association.

Scott was predeceased by his parents Walter F. and Carol A. (McGowan) Rogers and two sons that died at birth, Walter S. and Bernard K. Rogers.

Friends and family are invited and may call at the Phillips Memorial Home 64 Andrews Street Massena, NY on Wednesday October 5th from 3:00 pm to 7:00 pm.

The Massena Benevolent and Protective Order of Elks will hold a service at 6:45 PM.

A Mass of Christian Burial will be held on Thursday October 6, 2022 at 10:00 am at The Church of The Sacred Heart, the Rev. Mark Reilly officiating.

Family and friends are invited to share on-line condolences and memories at www.PhillipsMemorial.com