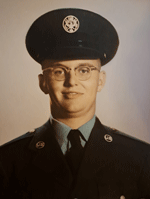 PARISHVILLE – A Celebration of Life gathering for Ronald A. Robar, 84, a resident of the North County Center for Nursing, Massena and formerly of Parishville, will be held at a later date.

Born in Syracuse, NY on February 21, 1938 to the late Harvey C. and Ivy B. Campbell Robar, Ronald graduated from Parsihville-Hopkinton Central School and entered the U.S. Air Force, serving from 1956-1959.

He worked for many years as a truck driver, most recently driving for Adon Farms and previously for Sheehan’s and Clark Phippen Trucking.

Ron also was a past owner of the Dugway Tavern in Parishville.

Ron enjoyed the outdoors, especially hunting and was a longtime member of the Parishville Sportsman’s Club.

He also was a member of the Parishville Fire Department and enjoyed reading and watching NASCAR.

The Buck Funeral Home is serving the family of Ronald A Robar.