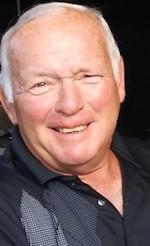 HEUVELTON -- Funeral services for Ronald F. Paro, age 71 of Heuvelton, will be held at 11:00am on Thursday December 1, 2022, at the Fox & Murray Funeral Home with Pastor Linda Foody officiating. Burial will immediately follow at the Hillcrest Cemetery in Heuvelton. The family welcomes you afterwards to join them at Heuvelton Fire Hall to honor the celebration of Ron’s life.

He was predeceased by a brother, Bradford Paro; and a sister, Beatrice (Robert) Lytle.

Ron was born on August 21, 1951, in Ogdensburg NY, a son of Robert & Martha (Daniels) Paro. He attended Lisbon School for his education, where he met and later married Paula Lintz on August 23, 1969.

Ron took over his family farm when he was a junior in High School, which he operated until he sold it in 2012. He then became employed with Royal J. Acres where he has worked up until his recent illness.

Ron enjoyed farming for the past 52 years. He also bowled in a men’s league for many years. He enjoyed snowmobiling, planting & harvesting sweet corn, vacationing with his family, eating out with Paula, helping his kids with building projects, and spoiling his pet dog Ozzy.

Memorial contributions can be made to the Potsdam Humane Society, Hospice of St. Lawrence County, or the Hillcrest Cemetery Association. Condolences and fond memories can also be shared online at www.foxandmurrayfuneralhome.com.