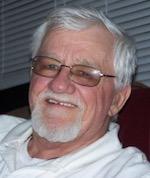 OGDENSBURG -- Funeral services for Robert E. Massia, age 80, will be held on Monday, July 6, 2020 at Notre Dame at 10 a.m. with Rev. Joseph Morgan officiating. A small private burial will be held at Foxwood Memorial immediately following the funeral.

Bob was born on August 18, 1939 in Ogdensburg, NY, the son of Henry & Lillian (Robillard) Massia. After the death of his parents when he was a child, he was raised by his maternal aunt and uncle Philomena & Jimmy Mills. Bob graduated from St. Mary’s Academy. He served in the United States Army and was stationed at Fort Dix, NJ until he was honorably discharged in 1964.

Robert E. Massia married Kathyrn F. Caufield on February 24, 1962 at Notre Dame in Ogdensburg, NY. They made their home in Ogdensburg and began raising their family. Bob worked at many trades during his career, but mainly as a millwright, carpenter, and mason. Over the years he worked at Standard Shade Roller, Ferro, St. Lawrence Seaway, to name a few, ultimately retiring from Riverview Correctional Facility.

Bob enjoyed many hobbies throughout his life. He was an avid hunter and fisherman, as well as bowler, scuba diver and golfer. His creative side was expressed through his woodworking and singing with the Canton Goldenaires Barbershop Choir. Bob had a loving spirit and servant heart and he was very active in his community and church. He served in the Ogdensburg Rescue Squad for over 10 years, and later in life he dedicated his time to the Notre Dame parish serving as a Eucharistic Minister, Alter Server and member of Choir. A member of the Knights of Columbus, Bob was a 4th Degree Knight and in 2013, he was honored for his years of service being named as Knight of the Year.

Memorial contributions can be made to The Ogdensburg Neighborhood Center. Condolences can also be shared online at www.fraryfuneralhomes.com.

The kind, friendly and giving spirit of Bob Massia will forever be remembered among his family and friends. “Well done, Good and Faithful Servant.”