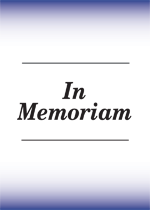 PARISHVILLE -- Private graveside services for Rita A. DeCarr, a resident of the Massena Rehabilitation and Nursing Center, Massena and formerly of 3448 Whitehill Road, Parishville, will be held in St. Patrick’s Cemetery in Colton.

Rita is survived by her son, Stephen and Annette Green, Parishville and her daughters, Debra and Tony Parisi, Florida and Janet Moyer, Watertown as well as her beloved eight grandchildren and fifteen great-grandchildren.

Rita was pre-deceased by her parents and her late husband, Robert DeCarr.

Rita was born in Potsdam, NY on March 7, 1940 to the late Leo and Florence Roberts Connelly.

She always kept busy as a homemaker and also worked outside the house at Potsdam Laundry and tended bar at the Colton Hotel and the Birches in Hannawa Falls. Marriages to Fred Green and Richard Barish previously ended in divorce.

Rita enjoyed spending time with her friends and family, especially her grandchildren.

Memorial donations in Rita’s memory can be made to any local Alzheimer’s Association.

Memories and condolences may be shared online at www.buckfuneralhome.com .