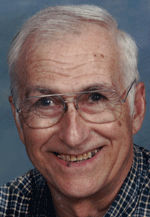 MASSENA — Richard A. Romeo, age 90 passed away peacefully Friday, May 6th, 2022, at Massena Hospital surrounded by his family.

Arrangement are under the care and guidance of the Phillips Memorial Home, 64 Andrews Street Massena, NY.

A service of Christian Burial will be held at the Phillips Memorial Home at 2:00 P.M. immediately followed by burial in Calvary Cemetery, Massena with full military honors.

Born in Massena on May 25, 1931, he was the son of the late Myrtle Belile Romeo and Anthony Bellantoni.

Richard was adopted by Anthony Romeo as a child.

Richard attended and graduated from the Massena High School.

After graduation, Richard joined the United States Air Force during the Korean War and he served from 1950 until 1954.

Upon arriving home, he went to work at ALCOA.

Richard was a very devoted husband and a loving father and grandfather.

He thoroughly enjoyed his life’s work at ALCOA as a General Mechanic.

He had a natural ability to fix anything mechanical and was happy when helping people as he worked on things from cars to farm equipment.

His family and his wife’s family were important to him.

In homemade campers and redone trucks, he drove us across the country to California three times to visit relatives.

We saw all the National Parks along the preplanned routes.

Each of his children was encouraged to use their God given talents and he supported us in our life’s efforts.

He retired early to tenderly care for our mom for ten years when she was diagnosed with Alzheimer’s.

As a widower, he found new purpose in volunteering for Meals on Wheels and even choose a car that supported transporting all the coolers of food.

Although a quiet man, he touched so many lives with his common sense to simply do what needed doing-even putting air in the bike tire of a child’s friend.

He was a wise man and endlessly worked on crosswords.

Exercise and good nutrition were passions.

He was a gentleman to the end, saying please and thank you.

Loved by us all and all his pet cats over the years, he will be dearly missed.

A very special thank you to Stella Measheaw who our father described as a compassionate and outgoing person, as she enabled our father to remain in his home these past few years.

Richard is survived by one son, Thomas Romeo of Massena and one daughter Allison (Rob) Lewis of Syracuse.

A son in law Larry Kubissa of Clyde, NY.

He is also survived by five Great-Grandchildren.

In addition to his parents, Richard was predeceased by his wife, Doris, and his daughter Darcy Kubissa.

In lieu of flowers, donations in his name may be made to the Massena Meals on Wheels; 70 E. Hatfield Street, Massena, New York 13662.

Friends and family are encouraged to share condolences and memories of Joanne by visiting www.PhillipsMemorial.com