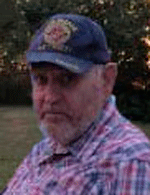 Richard was born on October 6, 1942, in Ogdensburg, the son of the late Merrill and Clara (Backus) Goolden.

He attended Norwood-Norfolk Central Schools and later achieved his GED.

On February 24, 1967, he entered the United States Marine Corps.

While serving in Vietnam, he was viciously attacked by a tiger, causing injuries which disabled him throughout his life and awarded him with the Purple Heart.

Returning home after his discharge, he met Carol A. Farmer, they married on November 6, 1969, at the Massena First United Methodist Church.

Richard was able to return to work through a disability program at General Motors, where he continued until his retirement.

He was a life member of the VFW Post 1143, American Legion Post #79, and the Massena Marine Corps League.

Richard enjoyed hunting, cutting wood, gardening, motorcycling, boating, waterskiing, and proudly built the home where he raised his family and continued to live.

Richard is survived by his loving wife, Carol; his children, Kim and Jeffrey Carpenter of Alexandria Bay; Todd and Jami Goolden of Massena; Holly Goolden of Norfolk; his grandchildren, Annabell and Tica Goolden, Brady Carpenter, and twins Mason and Maddison Goolden; his sister, Debbie and Randy Fenton of Massena; his brother, David and Andre Goolden of Massena; and many nieces and nephews.

Arrangements are the care and guidance of the Donaldson Funeral Home, Massena, where calling hours will be held privately.

A graveside service with military honors will be held October 7, 2022, at 1:00 PM at Calvary Cemetery.

In lieu of flowers, those wishing may consider memorial contributions to be made in his memory to the Wounded Warrior Foundation.

Friends may share memories and offer condolences online at www.donaldsonfh.com.