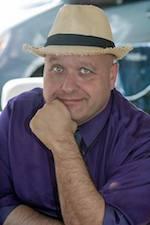 POTSDAM --  Richard Louis Tenace, 54, passed away unexpectedly at his home on October 13, 2020. Due to NYS Covid restrictions, his family will honor his life privately. Arrangements are entrusted to Hammill Funeral Home in Winthrop.

Richard was born on March 19, 1966 in Schenectady NY, son of Louis and Sharon (Meyers) Tenace. He graduated from Schalmont High School in Rotterdam NY. After High School he went to Sarasota, FL to train as a Barnum and Bailey Circus Clown (Corky the Clown). Richard completed training and then became a member of the graduating class at the renowned The Second City Theater Company in Chicago IL and received a Bachelor’s in early education from Ashford University.

He married Patricia Daigh in Chicago, a union blessed with a son, Jonathon Louis Tenace. The marriage ended amicably. He married Marguerite S. “Suzy” Reeves on September 27, 2002 in Rotterdam, NY. They embraced each other’s children, family, and friends. They were true partners in life.

Richard lead an extraordinary life: He was a magician, a Circus Clown for Barnum and Bailey, a Mentalist, a published author, was a semi-professional wrestler in the Rochester area known as Truman P. Wellington III (playing the villain), was an announcer and actor at the Gaslight Village Theater, while in the Albany area, he was a Manager at The Costumer where he was their mascot, known as Vampy the Vampire. He was an actor in many local commercials. In Potsdam he was an Apartment Manager at Swan Landing and Meadow East. He followed his faith at The Church of Jesus Christ of Latter-day Saints in Potsdam, where he was a Leader in many positions, his most enjoyed positions were Branch President in Massena, and Seminary teacher.

His family is requesting a Memorial Fundraiser to honor Richard by clicking on the Red Donate Now button. If you wish to donate you may leave an online message for the family, which can be viewed by clicking on the Tribute Wall tab. You may also choose to remain anonymous.

All donations will be directly deposited to our funeral home. If you are unable to donate, please help ’spread the word’ by sharing the tribute link with all your contacts on social media, email and or text.

Richard’s family thanks you in advance.

Memories and condolences can be shared with his family at www.hammillfh.com