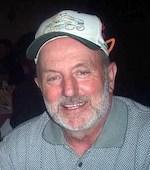 Richard James “Dick” Casey was called home by the Lord at the age of 74 on Tuesday, November 8, 2022.  He was a dedicated husband, father, brother, papa, and great grandfather.

Born in Potsdam on May 7th, 1948, he was the middle child of seven sons born to Bill and Marion (Strader) Casey.  He graduated from Potsdam High School while attending the BOCES automotive program. He began working as a farmhand at a young age; first at the John LaValley Dairy Farm located across the road and later at the Edmund Sheehan farm where he met the love of his life, Katherine. They married on June 27th, 1970, at St. Mary’s Church in Potsdam and went on to raise five children in his childhood home.  Dick did not shy away from hard work. He worked nights at the Mobil gas station on the corner of Maple and Pine, where at the time, he would want you to know, gas was only $0.36 per gallon.  He also worked days at Adirondack Auto Sales and washed trucks for UPS.  He went on to work for a short time at Alcoa and for the St. Lawrence County Highway Department. He retired from the NYS Department of Transportation.  Some of his children remember going with him to plow roads in the middle of the night.  After retiring, Dick opened the Shamrock Marketplace. He loved going to auctions and checking sales on online buying sites. He loved a good buy and an even better sale. He looked forward to setting up the tent on Market Street during the summer months where he would visit with many and tell stories of days gone by.  He was an avid woodsman, logger, and woodworker. Many pieces of furniture in his home are made from wood he cut.

When he wasn’t working, Dick enjoyed growing pumpkins and tomatoes, mostly for the enjoyment of his grandchildren and children. Canning tomatoes was an annual event. He was his children’s biggest fan at school and sporting events and was proud of their accomplishments. He loved watching old Western movies and reading Louis L’Amour novels, which his mother introduced him to at an early age. Watching wildlife in the backyard, making sausage bread, salsa, taco dips and sugar cookies were favorite activities. He loved short and long road trips and was at the ready for a good card game. His various collections are too numerous to list! Dick was a Life Member of the Elks Club and a past member of the Moosehead Hunting Club. He treasured his Catholic Faith and attending Mass at St. Mary’s in Potsdam.

In their younger years, Dick and Kathy enjoyed round and square dancing around the North Country.  Dick loved the NYS Fair along with local fairs and tractor pulls and Las Vegas Construction Shows.

Dick will be remembered for his generosity and for being genuinely and whole-heartedly there for those in his life.  He was greeted in heaven by his parents, his brothers Pat and Brian, his grandson Riley Basford and many dear friends that he considered family.

The family would like to thank the loving and gracious emergency responders, and those at the Canton-Potsdam Hospital Emergency Room and ICU, who cared for him and provided compassion and grace.  In addition, Dr. Thakur, who was his long-time physician.

Calling hours will be held at Garner Funeral Service on Monday, November 14th from 3:00 to 7:00 p.m.  A funeral mass will be held at St. Mary’s Catholic Church at 10:00 a.m. on Tuesday, November 15th with burial following at St. Mary’s Cemetery in Potsdam. The funeral mass will be livestreamed and information can be found on the funeral home’s website. Condolences, prayers, thoughts, kind words and memories may be shared with the Casey family online at www.GarnerFH.com.