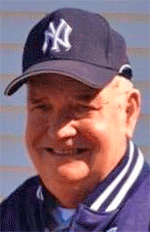 A memorial service will be held at Garner Funeral Service in Potsdam, NY on August 10, 2019 at 1:00 p.m. followed by a burial service at the Unitarian Universalist Church in Canton, NY.

Born in Syracuse, NY, on December 4, 1935, Dick was the son of Francis and Katherine (Sabourin) Fennessey, and attended Onondaga Valley Academy.

He served for more than 20 years in the U.S. Air Force, from which he retired in 1974 as a first sergeant. His service included a tour in Vietnam. He also worked at the Association for Retarded Citizens (now The ARC) of Onondaga in Syracuse for many years.

He was a devoted husband to his wife of 52 years, Pauline (Stock) Fennessey, who passed away in 2009. Dick also was predeceased by his twin brother, Leo, of Coppers Cove, TX; his sister, Katherine (Herbert) Merritt of Valatie, NY; and his sons Peter and Michael.

In lieu of flowers, the family requests that donations be made to the Potsdam Volunteer Rescue Squad or Hospice and Palliative Care of St. Lawrence County.