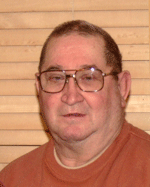 Dick was born August 10, 1940 in Potsdam, the son of the late Carl and Bernice (Wing) Eddy. He attended schools in Deferiet, where he graduated from Deferiet High School. On January 10, 1961, he entered the US Air Force, proudly serving his country until his honorable discharge on January 8, 1965. On August 23, 1966, he married Catherine E. Van Pelt at the Cranberry Lake Presbyterian Church.

Dick worked at the Newton Falls Paper Mill for many years, retiring as a machine tender. He was an avid sportsman who found great peace while in the woods hunting or on the water fishing. He was a longtime member of the Cranberry Lake Fish and Game Club and former member of the Newton Falls Rod and Gun Club. Dick also enjoyed flower and vegetable gardening and was an avid watcher of Fox News.

Dick is survived by his beloved wife of 56 years, Catherine; his sons, Mark and Joanne Eddy of Massena; Michael Eddy and Christine Fiore of North Bangor; and Brian and Jackie Eddy of Massena; his grandchildren, Jacob, Tyler, Megan, Tad, and Luc Eddy; his sister, Carol Foster of Herrings, New York; and nieces and nephews.

In addition to his parents, he was predeceased by a brother, William James Eddy on June 16, 2018.

Arrangements are under the care and guidance of the Donaldson Funeral Home, Massena, where services will be held privately at the convenience of the family. Burial will be in Cranberry Lake Cemetery.

In lieu of flowers, those wishing may consider memorial contributions made in his memory to the Star Lake Fire and Rescue, PO Box 22, Star Lake, NY 13690 or the Wilderness Healthcare Foundation, 1014 Oswegatchie Trail Road, Star Lake, NY, 13690.