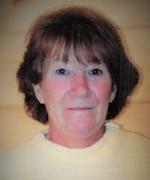 Priscilla was born May 30, 1956 in Potsdam, a daughter of the late Rodger and Barbara (Rivers) Blackmer. Upon graduation from high school, Pricilla attended Canton College for nursing, which led to a career with United Helpers Nursing Home until her retirement.

Priscilla was a loving wife, mother, sister and “Nana”. She enjoyed reading and spending time wither her family, especially her two grandchildren.

Priscilla is survived by her husband, Gerald Lucas of Canton; son, Jeremy and wife Nellie Lucas and their two children of Canton. Also surviving are two sisters, Sue (Paul) Gratto of Lisbon and Cindy (Al) Daniels of Canton; a brother, Mark Blackmer of Potsdam; and several nieces and nephews.

There will be no services. Contributions in her memory may be made to Hospice and Palliative Care of the St. Lawrence Valley; 6805 US Highway 11; Potsdam, New York 13676.

Memories and condolences are encouraged online at www.olearyfuneralservice.com. Arrangements for Priscilla R. Lucas are under the care of the O’Leary Funeral Service of Canton.