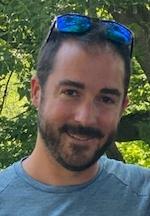 A celebration of life honoring Paul will be held at Frary Funeral Home in Massena, to be announced at a later date.

Arrangements are under the care and guidance of Frary Funeral Home, 60 Maple Street, Massena.

On June 16, 1980, Richard and Judith (Hoernel) welcomed the birth of their son, Paul William, at Massena Memorial Hospital. Paul attended Twin Rivers Elementary School and was home schooled for the remainder of his school years. He attended SUNY Canton where he majored in Heating and Plumbing.

On February 20, 2020, Paul married the love of his life Jordan Thomas in an intimate ceremony in Massena. Together they built a life of laughter and happiness, caring and supporting each other through their strong faith. Love filled their home, where they resided with their cherished pets, Tucker, Thomas, and Baby. They were each other’s best friends.

As a young man Paul worked for Chip-N-Dale’s Dairy Farm on the North Raquette Road, and at NAPA Auto Parts before his current employment at Alcoa West, where he worked in the Carbon Plant.

Paul is survived by his wife, Jordan; two sons, Hayden Nezezon of Albany and Adam (Celsea) Nezezon of Brasher Falls. Paul has two grandchildren, Amelia and Justin, whom he loved dearly. He was so proud to be a grandfather. He is also survived by his father; and three brothers, James, Peter (Brenda), Richard (Kari); nieces, Mallory and Zoe, aunt Andrea Masson, all of Massena; and uncles, Harry (Maureen) Klages and Bob Hoernel, of Florida. He was immensely loved by his in-laws, mother in-law, Robin LaBaff of Potsdam; father in-law, Peter (Melissa) Thomas of Waddington; grandfather, Ernie LaBaff of Potsdam; sister in-law, Nance (Randy) Arquiett of Winthrop; and brother in-law, Peter Thomas of Brasher. Uncle Paul was so special to all of their children.

Paul enjoyed boating, camping, hiking in the Adirondacks, shooting guns, and walking in the woods with his wife and their dogs. In his youth he could be found getting into mischief up and down the Raquette River with his three brothers and their dog Fred. Being with family was what made Paul happy. Jordan, his boys, and his grandchildren were his favorite things in life.

Paul’s sense of humor was the perfect combination of dry wit and quirky silliness. His laugh was big, loud, and infectious. He had a warmth that made you feel comfortable and welcome in his presence. Paul will be greatly missed by all who knew and loved him.

Memorial contributions in Paul’s memory may be made to The Massena SPCA, 177 South Raquette River Road, Massena, NY 13662.

Online condolences may be shared with Paul’s family at www.fraryfuneralhome.com.