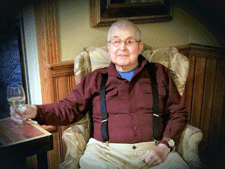 Arrangements have been entrusted to French Family Funeral Home in Star Lake.

Condolences may be shared online at www.frenchfuneralhomes.com.

Paul was born on May 17, 1929, in Piercefield to the late Onesiphor and Malanee (Perth) LaRocque.

He attended school in Piercefield and served in the United States Army Corps of Engineers in the rebuilding of German powerplants after WWII. He served from April 5, 1951, until his honorable discharge on February 26, 1953.

Paul married Dona B. Kerr on December 20, 1960, at St. Hubert’s Catholic Church. Mr. LaRocque worked as the Parts Manager for Kerr Brother’s Garage from 1953 until 1968 when he opened Paul’s Gas Service in Star Lake, operating that for many years along with plowing snow in the winter before his retirement.

He helped spearhead the private fundraising to build the Clifton-Fine Arena and devoted his time to developing the arena for both the hockey and figure skating programs.

Paul was an active member of the Lion’s Club and a lifetime member of the American Legion Post 1539. He was a founding member of the Bear Mountain Hunting Club and enjoyed hunting, boating, and camping throughout the north country.