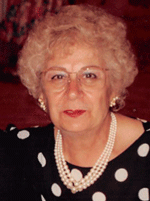 MASSENA — Nevart Kaprielian Bogosian, 92, paassed away on September 1, 2022, at home surrounded by her loving children.

Arrangements are under the care and direction of Phillips Memorial Home 64 Andrews Street Massena, NY.

Nevart was born in Xánthi, Greece on December 18, 1929, to the late Mr. Nubar Kaprielian (Konya) and the late Ms. Susanna Peltekian (Dörtyol).

She was their only child and was half-sister to the late Mrs. Theologos (Lulu) Niskopoulos of Pireaus, Greece.

Prior to moving to the United States in September 1949, Nevart resided in Athens, Greece; Salzburg and Vienna, Austria; and Budapest, Hungary.

Nevart’s passion was her family and dear friends, her Armenian heritage, travel, reading, her pets, and creative arts.

She was an accomplished cook and consummate hostess.

She channeled her love of entertaining into The Pampered Home, a gift store specializing in eclectic tableware crystal, and collectibles.

She was an expert backgammon player who also loved playing pinochle games with family and friends.

During her life, Nevart was active in the Massena Community and in Armenian community and charitable organizations, including the Armenian Red Cross Society, St. John’s Episcopal Church, and the Order of Eastern Star.

Those wishing to honor Nevart can do so by making contributions in her memory to the Armenian Tree Project (www.atp.org), a not-for-profit organization devoted to environmental conservation in Armenia or the animal rescue group: www.friendswithfourpaws.org

Family and friends are invited to share on-line condolences and memories at www.PhillipsMemorial.com