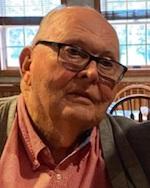 Neil was born on December 23, 1938 in Massena, the son of the late Hartley and Mabel (Hawkey) Kennedy. He attended school in Massena and joined the United States Air Force where he retired after 22 years as Master Sergeant. Neil then started working at Reynolds Metals in Massena retiring in 1998 after 20 years. He married Martina Bouwmans on October 3, 1961 in Holland.

Neil enjoyed wood carving, hunting, fishing and spending time on his computer. He was a member of the VFW Post #1143, AMVETS Post # 4 and the Knights of Columbus Council #1141.

He is predeceased by his brothers, Donald, Robert, Doug, Wayne and William Kennedy.

A Funeral Mass will be held privately at St. Mary’s Church in Massena with burial taking place in Massena Center Cemetery.

Memorial contributions in Neil’s name may be made to St. Peters Parish in Massena.

Arrangements are with the Donaldson Funeral Home in Massena where online memories and condolences may be shared with the family at www.donaldsonfh.com