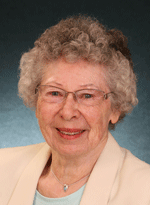 CANTON — Nancy Eileen Ross Auster, 96, of Canton, New York, who lived a full and inspiring life, died peacefully at home on October 14, 2022, surrounded by loved ones. Nancy was born in New York City to Norman and Edith Ross. Nancy’s beloved husband, Don Auster, with whom she shared 75 marvelous years of marriage, predeceased her in December 2021.

Nancy graduated from Port Chester High School where her activities ranged from Executive Council and Junior Red Cross to cheerleading, field hockey, and basketball. She met Don after he returned from serving in the Army during World War II, and they were married in 1946. In 1948, she received her Bachelor of Arts degree from Barnard College. Nancy and Don later moved to Indiana where Nancy graduated top of her Master’s of Business Administration (MBA) program at Indiana University. In 1957, Nancy and Don moved to Canton, New York, with their two young daughters, Carol and Ellen. In 1966, Nancy joined the faculty at Canton Agricultural and Technical College (ATC), now the State University of New York (SUNY) at Canton, where she served for 25 years until her retirement in 1991 as Distinguished Service Professor of Economics Emeritus.

Throughout her career, Nancy was a pioneer who bravely shattered glass ceilings and courageously paved the way for other women. Among her many achievements, she was the first person to receive SUNY Canton’s Distinguished Faculty Award, the first woman to be elected to the Faculty Senate from SUNY Canton, the first faculty member from a two-year college and the first woman from any college or university in the SUNY system to be elected President of the statewide SUNY Faculty Senate, and the first faculty member at SUNY Canton to be promoted to Distinguished Service Professor, the highest academic rank conferred by the State University Board of Trustees.

Nancy’s visionary, fair-minded, and pragmatic approach made her highly effective on the SUNY Chancellor’s Advisory Committee and as a union contract negotiator with the United University Professions (UUP). Throughout her career, Nancy’s students greatly appreciated her use of everyday examples and current events to help them understand complex economic concepts and dynamics. Nancy has been recognized for her many professional achievements, and her biography appears in Who's Who of American Women as well as in the 60th Diamond Anniversary edition of Who's Who in America. Locally, SUNY Canton named their “2013 Honors Convocation in Recognition of the Professional Achievements of Professor Nancy R. Auster”.

Nancy was also an inspirational role model and mentor in realms beyond her career. At the age of 50, Nancy and Don started running at the suggestion of their daughter, Ellen. For years after, they started their day at dawn with a run and also participated in running races with their daughters and granddaughters. In her sixties, Nancy began doing duathlons and triathlons. She became well-known throughout the North Country as a runner, triathlete, and duathlete and was often the oldest competitor. Nancy competed in over 500 races, including the Ottawa marathon and won the USA Master’s Long Distance Running Track and Field Women’s 5K national title in her age category four times, most recently at age 86. Nancy reshaped notions of women’s athletic ability, particularly as they age, and inspired many who enthusiastically cheered her on. She was also very active in the Women’s Running and Walking Group in Canton that continues to this day.

Nancy was adventurous and took dozens of cross-country tent camping trips with her family, visiting all 50 states and many US and Canadian National Parks. As a lifetime birder, she saw approximately 600 species of birds and took great delight in the wooded oasis in their own backyard and in their many visits to Chincoteague National Wildlife Refuge in Virginia. After retirement, she and Don continued to travel in North America, including several trips to Sanibel Island and Captiva Island, Florida, the Bahamas, and Bermuda. They also travelled to remote locations in Trinidad and Tobago, Turks and Caicos, Belize, Guatemala, Panama, Honduras, and Costa Rica. In Europe, they explored France, Belgium, Austria, Germany, the Netherlands, and Switzerland. They whale-watched amongst icebergs in the Atlantic Ocean, searched for the rare oil bird in caves in the Caribbean, explored rain forests in Central America, and hiked in the Alps. Their daughters and granddaughters accompanied them on many of these trips.

Nancy lived in an era when few women sought to balance a demanding career and motherhood, yet she did so beautifully. She was a wonderful Mom and GrandMom and an avid athlete who found time to sew clothes for her young daughters, grow vegetables, make delicious homemade soups, breads, applesauce and cookies as well as bike, swim, ice skate, play tennis, fish, and down-hill and cross-country ski with her family. She also lovingly cared for their adopted cats. In earlier years, she knit beautiful hats, mittens, and blankets for her daughters and extended family. In the 1990s, she took up quilting and many of her quilts, recognized for their bright, vibrant colors and unique and modern designs, were displayed in area quilt shows.

She did it all by being meticulously organized yet flexible and a life-long learner, and with the unwavering support of her husband, Don. She was grounded, down-to-earth, and humble yet brave with extraordinary perseverance and strength that enabled her to continually exceed others’ expectations of what might be possible. Even in her final chapter with Alzheimer’s, she taught us how to be completely present and inspired us with her resilience and gifts of love and time.

Nancy was deeply blessed to have dedicated caregivers throughout her Alzheimer’s journey who cared for her and showered her with love. We are especially grateful to long-time caregivers, Kaitlin Corscadden, Katie Smith, Kelsi Shippee and the Corscadden family, and to Sarah Smith-Briggs, Alanna and Tina Vassar, and Nancy’s friend, Alex Bolis, who visited her regularly. We are also thankful for Nancy Fletcher and Dawn Brabaw from Hospice of St. Lawrence Valley who supported and guided our family.

Nancy offered advice at the end of an a autobiographical video that her husband Don made when she was 74. “Strive to do the best you can – there will be disappointments but one should attempt to overcome adversity as best as one can. Be concerned with and involved in helping to make the lives of those around you more enriched. Attempt to make the world or at least some small part of it a more desirable place. Enjoy everyday life as it develops.” Nancy’s optimistic spirit, generous heart, boundless energy, and bright smile lifted those around her. She will be forever and deeply missed by all those who knew her.

A Celebration of Life for Nancy and Don together will be held in Spring/Summer of 2023. In lieu of flowers, donations may be made online or mailed to Hospice of St. Lawrence Valley, Potsdam NY; Unitarian-Universalist Church of Canton, NY; or the Alzheimer’s Association of Central New York.