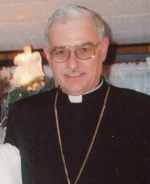 Rob was born January 22, 1950 in Ogdensburg, the son of Robert J. Tucker and Pauline M. Wood and was adopted by John Albert Delair.

He was a graduate of Heuvelton Central School and St. Lawrence State Hospital School of Nursing.

He continued his education achieving his Bachelor of Arts degree at SUNY Potsdam majoring in Industrial and Labor Relations.

He earned a Master of Divinity degree at the Christ the Teacher Seminary.

He proudly served his country in the US Navy and the US Army Reserves retiring as a Lt. Colonel.

In addition to his ministry with the True Greek Ukrainian Orthodox Catholic Church Eastern and Western Rite, serving at the Archbishop of the Archdiocese of Northern New York, Robert was a registered nurse working for Highland Nursing Home for many years.

While at Highland, he was a nursing supervisor and Licensed Nursing Home Administrator, serving as their Assistant Administrator for many years.

Robert was also committed to his community as a member of the West Potsdam Fire Department being honored as fireman of the year in 1982.

In 1985, he joined the Colton Fire Department, serving that community for 10 years.

Robert also had a great love for antiques, glassware, pigeons, and gardening.

Robert is survived by his daughter, Kierra Delair Yates of Parishville; his granddaughter, Lyla J. Lovelow; his sister, Diane and Stuart Edwards of Caledonia, New York; his brother Duane C. and June Delair of Arkansas; 11 nieces and nephews; and 4 great nieces and nephews.

Arrangements are under the care and guidance of the Donaldson Funeral Home, Massena where friends may call Friday from 11:00 AM to the time of the service at 1:00 PM with Rev. Paul Federoff, officiating.

In lieu of flowers, those wishing may consider memorial contributions to be made in his name to the West Potsdam Volunteer Fire Department, 801 County Route 34, Potsdam, NY 13676.