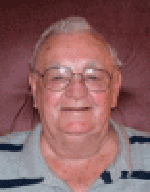 Mr. Miller was the son of Robert and Pauline (Millar) Miller of Richville. Molly was born on December 9, 1927, and spent his early years on the Maple Ridge Road. He married Betty Jean Alguire from Cooper’s Falls on October 26, 1949, and they bought a farm on the Old Canton Road in DeKalb where they raised their family.

Merrill is pre-deceased by his parents and a daughter-in-law, Mrs. Teresa (John) Miller of Rock Hill, SC.

Mr. Miller was an avid outdoorsman and especially enjoyed fishing at Osborne Lake and at his favorite secret fishing hole in Canton. He introduced his children early to the outdoors and loved to hunt with them. In 1967, Molly and Betty took their eight children on a camping trip across the country to California. In his later years, Molly developed a keen interest in roller coasters.

He will be sorely missed and his silly country quips that he used on a daily basis have carried forward to all that knew him. He will always be remembered in our thoughts and felt in our hearts.

There will be no calling hours. Arrangements are with Mansion Memorial Park and Funeral Home. A memorial service is planned for Terra Siesta Park in Ellenton, FL and another memorial will be held at a later date in the North Country at the convenience of the family.