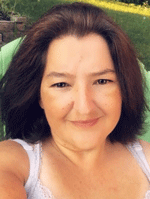 Melissa was born December 31, 1976 in Malone, NY the daughter of Albert and Kim (Patnode) Hynes.

She attended Salmon River Central School and later would work as a night auditor at the Holiday Inn Express in Plattsburgh.

She later helped create a paranormal team known as APPS.

She loved helping assist in the investigations both behind the scenes, as well as in the field.

When she wasn’t volunteering, she enjoyed cooking for her family, as well as spending time with her 3 children and 4 grandkids.

She also enjoyed going to Donnelly’s Ice Cream, car rides with the music blaring and always made sure she had a bottle (or two) of Mountain Dew with her at all times.

Melissa is survived by her fiancé James Buckson of Morrisonville; her mother, Kim Hynes of Syracuse; her children Kaylynn Conto, and companion Jacob Plourde of Norfolk NY; Baley Conto and his fiancé Kaelyn Rice of Massena NY; Devin Conto of Morrisonville; the Father of her children Scott Conto of Altona NY; her 4 grandchildren, Carson, Kaiden, Amyah and Declan; two half-sisters, Kissie Hynes of PA; Rebecca Hynes of Massena; a half-brother Alexander Hynes of Massena.

She was predeceased by her father Albert Hynes.

In following their mothers wishes, there will be no calling hours or services.

Arrangements are under the care and direction of the Donaldson Funeral Home in Massena where memories and condolences may be shared online with the family at www.donaldsonfh.com