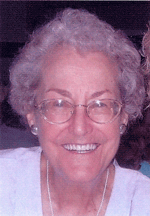 BRIER HILL — Mary Margaret Patricia “Pat” (Alberry) Whalen was born on February 27, 1930 in Brockville, Ontario to Harvey Edward Alberry and Marguerite LaVigne Alberry. She left her earthly adventure on September 24th to go clean and cook fish for her husband and son.

Graveside services will be Saturday, October 1, 2022 at 11:00 at Pine Hill Cemetery in Morristown.

Arrangements are with the IslandView Funeral Services, 300 Main Street, Morristown. Condolences, photos and flowers can be shared online at www.islandviewfs.com.

In 1946 Pat worked as a butcher at Tanner’s Grocery on outer King Street during the week and on weekends took the ferry to Morristown to stay with her best friend, Norma Whalen. One particular weekend, while dancing at the Lodge Restaurant, she asked Norma who the handsome man across the dance floor was. Norma answered, “That’s my brother Bob”. It was love at first sight for Pat and Bob soon realized that she was right about almost everything. They were married on May 21st, 1951 and immediately started creating what she would say were “big, beautiful Irish babies”. All of her seven children were born without complaint and most were near ten pounds.

Oh, man. Could Pat cook. Nine hungry people around the table, three times a day. She had plenty of practice! Her knowledge, skill and finesse quickly made her a THE woman to call with questions about how to prepare anything. No one could make turtle, rabbit, squirrel, raccoon and especially fish taste so good. Pat Whalen could cook anything.

All of her children can remember getting off the bus after school and coming home to our beautiful mom, singing in a warm and cheerfully lit kitchen. There was always bread or cookies perfectly timed to come out of the oven as the kiddos arrived. The smells were exquisite.

In 1972 Pat and Bob bought Whalen’s Garage and General Store from Bob’s parents, Art and Miriam Whalen. She was no longer in her own kitchen to receive her own kids anymore, but she spread that love to all of the patrons of the store. Many in town remember her penchant for photography and her wall of children’s photos at the store. She took a photograph of every child who came, sent the roll of film off to Mystic, CT for development, impatiently waited for their return. She glued these photos to a wall at the entry of the store. If your picture was on her “wall”, and you came in on your birthday, you would receive a free candy bar PLUS she would sing the birthday song.

When Pat became legally blind she took up the bongo drums. She was really good. She made connections with local bands and was very proud to play at Jacques Cartier and the Russell Opera House with The Flying Coconuts. Later she played with Chippewa Breeze and many other pickup bands around the area at Mare’s Wares July 1st Arts Festival. And the gig clothes! Those Canadian girls understand fashion and flare. Who can’t picture Pat Whalen in the Pierre Cardin feather dress or the leopard bell-bottomed jumpsuit? Pat Whalen was a true Rock Star.

Pat was President of the American Legion Auxiliary Memorial Unit #1732 in Morristown. She was a member and President of the Brier Hill Volunteer Fire Auxiliary. She bowled for many years in Brockville and Hammond, and was very proud to have Whalen’s General Store sponsor a team in an Ogdensburg league.

She was a gifted artist, seamstress, knitter, and upholsterer. She read every day. She will always be known by family and friends as the best fish and wild game preparer and cook for miles around.

The family would like to express their deep gratitude for River Hospital in Alexandria Bay for their excellent care and compassion during her stay. The administration and staff were like family these past few weeks.