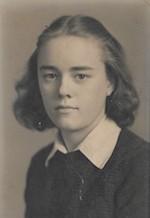 Mary was born on December 9, 1922 in Emeryville, NY to the late Frank G. and Cecil (Soper) Fuller. She graduated from Gouverneur High School in 1941. On March 28, 1942, she married Richard F. Sawyer Sr. at the First Presbyterian Parsonage with Rev. Schofield officiating. Richard passed away on January 26, 2011.

Mary worked as a homemaker, living in the Gouverneur area, moving to Russell in 1997. Mary was a member of the Gouverneur Museum. She was also an avid gardener, loved genealogy, collecting teddy bears, spoiling her grandchildren and was an amateur painter. She was very creative and artistic.

Mary is predeceased by her husband, Richard; two sons and daughter-in-law, Jerome (Buzz), Rodney and Joanna Sawyer and a sister, Alice Rumble.

There will be no calling hours. There will be a memorial service for Mary on Saturday, December 4, 2021 at 1:00 p.m. at the Russell Methodist Church. Condolences may be shared online at www.frenchfuneralhomes.com.