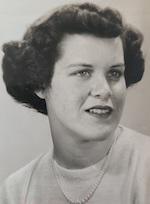 OGDENSBURG- A Mass of Christian Burial for Mary Ellen Denoncourt, 87, of Ogdensburg will be held on Thursday, November 17th, 2022, at 10 a.m at St. Mary’s Cathedral. Burial will follow in St. Mary's Cemetery. A visitation will be held on Wednesday, November 16th, 2022 from 4 p.m. to 7 p.m. at the LaRue & Pitcher Funeral Home, 324 New York Ave. Ogdensburg. Mrs. Denoncourt died on Friday morning, November 11th, 2022, at St. Joseph’s Nursing Home in Ogdensburg.

Mary Ellen Gaffney Denoncourt was born on June 10, 1935, in Ogdensburg. She was the daughter of the late Ralph and Mary Margaret (Condlin) Gaffney. A proud lifelong resident of the 4th ward, Mary Ellen graduated from St. Mary’s Academy, class of 1953. On April 17, 1953, she married Joseph E. Denoncourt at the Sacred Heart Chapel, by celebrant Monsignor Louis D. Berube. Mary Ellen worked at J.J. Newberry’s while Joe served in the United States Air Force in Korea. The couple would make their home at 1210 Jay Street, a home that Joe built with his own two hands.

She loved the holidays and always made them special, she loved to bake cakes for her children's and grandchildren’s birthday parties, and she was a master cake decorator. She enjoyed square dancing and bowling in her younger years, tending to her garden, and canning the vegetables that she grew. She was employed by the St. Lawrence Psychiatric Center in the laundry and for Fleet Bank as a teller until her retirement in 1990. She was a fixture at OFA Blue Devils sporting events, cheering on her children and grandchildren over the last five decades. A devout Catholic, Mary Ellen was a parishioner of St. Mary’s Cathedral. In 2007 she was awarded “Woman of the Year” at St. Mary’s for her contributions to the Parish.

Online condolences may be made at www.LaRuePitcher.com.