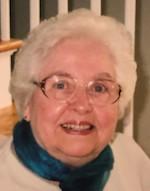 Born on December 16, 1925, in Brookline, Mass., Mrs. Lindgren was the first of five children born to Edgar C. and Ida Rollat Kennedy.

She grew up in Budd Lake, NJ graduating from the Netcong High School in 1943.

She and Bror W. “Bud” Lindgren Jr. were married in 1949 and the couple moved to Entiat, WA to be near the Cascade Mountain wilderness and their dear friends, Nora and Gwilym Williams. The couple’s four children were born while they lived in Washington.

Marthe Lindgren was a kind and loving soul who was adored in turn by all who knew her.

She was an active member of the Grace Methodist Church where she served in the bible study group, prepared food for and served at community dinners, supported many activities and fundraisers and where she was a member of the Pastor Parish Committee.

She was also a tireless supporter of the Library and was active in the American Field Service foreign exchange student program for many years, serving as president at one point.

The Lindgren family hosted Roberto Casarejos, a foreign exchange student from Chile in 1969 and 1970. Mr. and Mrs. Lindgren always considered Mr. Casarejos to be their fifth child visiting him and his family multiple times in Chile.

Mrs. Lindgren was an avid bridge player and enjoyed competing with her many friends.

She and her late husband traveled extensively in their retirement, circling the lower 48 states many times as well as spending extended stays in Alaska and Hawaii. The couple loved the outdoors and wilderness.

Mrs. Lindgren was a very accomplished gardener and was a member of the garden club. She was happy to spend countless hours cultivating plants and flowers wherever she lived.

She was an excellent cook and baker and her pies were famous among the church membership.

Finally, she loved her family above all else. She spent many weeks each year visiting with her daughters and sons and grandsons.

She traveled annually to Ohio, Colorado and Washington to visit her three brothers. She loved to visit her sister in New Jersey and traveled frequently to western North Carolina to visit with her cousins and extended family.

Mrs. Lindgren is survived by her son, Bowin M. Lindgren and wife, Sharon Lindgren of Wilmington, NC; her two daughters, Lucinda Lindgren Gadow of Sound Beach, Long Island, NY and Lise Lindgren Zucchero and spouse Dr. Susan Higgins of Clinton CT. She is also survived by her brothers, Howard Kennedy of Colorado and Henry Kennedy of WA; along with her cherished grandsons, Spencer W. Lindgren of New York City and Bror W. Glanville of South Park, PA; along with many beloved nieces and nephews.

A graveside service for family and friends will be held at a later date.

In lieu of flowers, the family requests that donations be sent to Grace Methodist Church; 41 NY Rte. 37C, and Massena, NY 13662.

Family and friends are encouraged to share memories, photo and condolence online by visiting www.PhillipsMemorial.com.