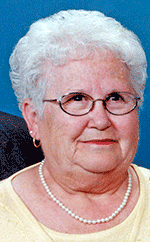 POTSDAM -- Funeral services for Marie A. MacDonald, 84, of Potsdam will be held on Monday, September 30, 2019 at 1 p.m. at the Colton Wesleyan Church with Pastor Tom Chappell officiating. Calling hours will be held from 3 to 6 p.m. on Sunday, September 29, 2019 at Garner Funeral Home in Potsdam. Marie passed away early Tuesday morning, Sept. 24, at United Helpers Rehabilitation and Senior Care in Ogdensburg.

Surviving are her sons James “Jimmy” (Lois) MacDonald of Waddington and Roger (Joanne) MacDonald of Potsdam; a daughter Judy LaShomb of Potsdam and step daughter Roseanne Czarnocki of Utica; a brother Richard Butterfield of Parishville; a sister Linda Hayes of Norwood; 6 grandchildren, 7 great grandchildren, and several nieces, nephews and cousins.

Marie was born October 14, 1934, a daughter of the late Lawrence and Margaret (Gary) Butterfield. She attended Colton country schools. Later she married James MacDonald on October 31, 1952 and started a family in the Pierrepont area. She was a stay at home mother and homemaker, and was active in her local church. She was steadfast, polite, kindhearted, and a good mother who was full of smiles.

Marie enjoyed knitting, crocheting, cross-stitch, chair caning, going on country drives, and spending time with her family and grandchildren who were her life. She was a former member and missionary in the Colton Wesleyan Church. Memorial donations in Marie’s memory can be made to Hospice and Palliative Care of St. Lawrence Valley; 6805 State Highway 11; Potsdam, NY 13676. Condolences, fond memories and thoughts can be shared online at www.garnerfh.com.