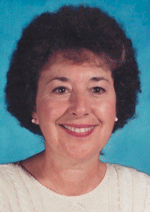 After a few years working in NY and NJ, Marie relocated to Boston, Massachusetts, and from 1954 – 56 served as the personal secretary to renowned voice coach, David Blair McClosky, and as executive secretary to the Chairman of the School of Arts, musicology division, Boston University.

From 1956 - 61, she worked as an audiology technician at the Massachusetts Eye and Ear Infirmary.

During this time, she performed frequently with the Plymouth Rock Center for Music and Drama, and studied as a Special Student in Voice at Boston University School of Fine and Applied Arts, College of Music.

Here, she met her husband, Floyd, whom she married April 18, 1959 in Brooklyn Heights, NY.

After Floyd completed his Master of Music at New England Conservatory of Music, Boston, MA, Marie and Floyd moved to Potsdam, NY in 1969.

During Floyd’s 35 years teaching voice at the Crane School of Music, SUNY College at Potsdam, Maire raised their two children, worked part-time as a bookkeeper at Clarkson Auto Supply, and served as an Elder and choir member of the First Presbyterian Church of Potsdam.

There, she performed many times as a soloist on Sundays and high holidays.

Marie also directed the church’s youth choir from 1976 into the 1990s.

In 1981, Marie graduated from the Crane School of Music with a Bachelors of Music Education.

She completed her Master of Science in Education at SUNY Potsdam and received a certification in Special Education in 1988.

In 1985, Marie had joined the faculty of the Massena Central School District, and taught Special Education and Remedial Reading until her retirement in 1998.

Throughout her 47 years residing in Potsdam and Madrid, NY, Marie was an active member of her community, performing with the Potsdam Operatic Society, Grasse River Players and as a soloist at Trinity Episcopal Church and St. Lawrence University.

In 2015, Marie and Floyd moved to Spring, Texas to be closer to their children, who lived there.

A memorial service for Marie was held for family and invited friends via video call, September 25, 2022.

An interment ceremony will be held 2:30 p.m., October 15th at Bayside Cemetery in Potsdam, NY where the remains of Maire and Floyd will be laid to rest.