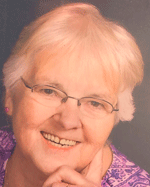 A graveside service will be held in the Spring in Evergreen Cemetery, Canton. Lawrence Funeral Home & Cremation Services is handling arrangements.

Marcia was born October 10, 1946 in Canton, NY and was a daughter of the late Edward G. and Elizabeth V. (Preston) Santimaw. She graduated Canton High School in 1964.

In addition to her husband Lloyd, Sr. she was predeceased by her brothers Paul, Jim and Robert Santimaw and sisters Alice Lehman and Doris Rosenbarker.

Marcia enjoyed most of her time with her companion Paul, traveling, watching movies and spending time together. She also did volunteer work for the Malone Adult Center and enjoyed reading, BINGO, crossword puzzles and Jumble.

Memorial contributions may be made to Evergreen Cemetery or a charity of one’s choice.