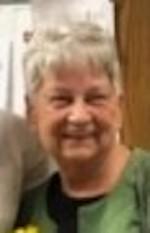 Calling hours are on Tuesday, July 30 from 10:00 a.m. - 12 p.m. with a funeral service at noon at the Green Funeral Home, Gouverneur and burial to follow in Hermon Cemetery.

Lorraine was born on March 5, 1941, the daughter of Earle and Mildred (Cook) Noble.

She graduated from Knox Memorial School in 1959 and from the House of the Good Samaritan School of Nursing in 1962 as a registered nurse. Her clinical nursing included 5 months in New York City and 3 months at the hospital in Ogdensburg.

Lorraine worked in the office of Dr. Finnerty in Watertown before employment at Alice-Hyde Hospital in Malone. She began working at the House of the Good Samaritan in 1974 and retired from Samaritan Medical Center in 2003. Her career in nursing was defined by her compassion for her patients and as a preceptor for starting nurses.

She was a member of the Samaritan Centennials and enjoyed cooking for her family, but most of all, she enjoyed spending time with her grandchildren, affectionately known as her “six pack”.

Lorraine is survived by her two sons. Timothy E. and Brenda A. Roberts of Copenhagen. Thomas C. and Angela M. Roberts of Watertown; her six grandchildren, Rebeka, Justin, Emma, Colton, Donald, and Noah. She is predeceased by her parents and a brother, E. Laurence "Larry" Noble.

Memorial donations in Lorraine's memory are encouraged to your local SPCA.