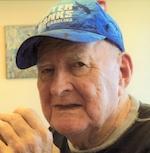 Lester worked off the land his entire life, as a dairy farmer, tree farmer, maple syrup producer, and owning and operating his sawmill, Snyder Sawmill for many years. As a teenager and young man, he cut the wood for the production of bowling pins. He loved to read, enjoyed walks, Sunday drives, and picnic. He cherished the precious time and memories with his children and grandchildren.

In addition to his parents and wife, he was predeceased by his brothers, Roland and Lyndon; his sister, Emily Butterfield; and two half-brothers, Marvel and Bernard Eseltine.

Due to the current health restrictions, services will be held privately under the care of the Donaldson-Seymour Funeral Home, Potsdam with burial in Crary Mills Cemetery.

In lieu of flowers, those wishing may consider memorial donations to the United Helpers Nursing and Rehabilitation Center Activities Fund at Maplewood.

Friends are encouraged to share memories, offer condolences, and sign his virtual register book by clicking on his obituary at www.donaldsonseymour.com.