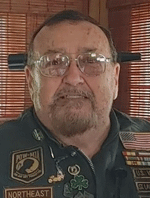 OGDENSBURG — Funeral Services for Kenneth Claude “K.C.” Hale, age 70, of Ogdensburg, NY and formerly of Plattsburgh, NY, will be held on Tuesday, August 23, 2022, at 11:00AM with military honors at Frary Funeral Home, Ogdensburg.

Arrangements are under the care and direction of Frary Funeral Home, Ogdensburg.

Mr. Hale passed away on Wednesday, August 17, 2022, at Upstate Hospital in Syracuse, NY.

He attended local schools in the Plattsburgh area and later enlisted in the United States Navy in 1970 where he served during the Vietnam Conflict.

He was later honorably discharged in 1974 at the rank of EN2.

K.C. was very proud and held the time he spent in the service in the highest regard.

K.C. married Patricia Mason on November 1, 1997, at their home surrounded by loved ones. Mr. Hale was employed as a corrections officer at Riverview Correctional Facility in Ogdensburg, NY, until his retirement on February 20, 2014.

One of his greatest joys was spending time with his brothers of the VFW.