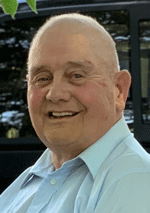 NORFOLK – A Mass of Christian Burial for Joseph E. “Joe” Myers, 83, a resident of the Massena Rehabilitation and Nursing Center and formerly of 27 Hepburn Street, Norfolk, will be held on Thursday, November 17, 2022 at 11 a.m. at the Church of the Visitation with Rev. Andrew Amyot presiding.

Burial will be held in the Visitation Cemetery, Norfolk, following the services.

Family and friends may call at the Buck Funeral Home in Norfolk on Wednesday from 2-4 and 7-9 p.m.

Joe is also survived by a brother, John and Christine Myers, TX and a sister, Mary Courcy, FL as well as several nieces and nephews.

Joe was pre-deceased by his parents, a son-in-law, Stephen Cotter and a grandson, Jacob “Jake” Ladouceur

Born in Croghan, NY on May 15, 1939 to the late Joseph C. and Juanita Smith Myers, Joe graduated from Norwood-Norfolk Central School, the class of 1957 and attended Canton ATC. He married Jean A. Babcock on August 27, 1960 and together, he and Jean raised their four children.

Joe worked at ALCOA in Massena as a Draftsman Engineer for 37 ½ years, retiring in 2000. Joe was a member of the Stoney Brook Hunting Club, the Potsdam Elks Club and a 60 year member of the Norfolk Fire Department.

In his free time, Joe enjoyed riding around in his golf cart, woodworking in his basement, attending his grandchildren’s sporting events and hanging around Bob’s Shop, visiting with people.

The family would like to thank the staff at Massena Rehabilitation for the wonderful care they provided Joe during his stay.

Memorial donations in Joe’s memory can be made to the Norfolk Fire Department or Norfolk Rescue Squad and memories and condolences may be shared online at www.buckfuneralhome.com. The Buck Funeral Home in Norfolk is serving he family of Joseph E. “Joe” Myers.