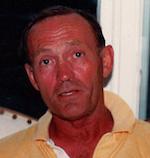 MASSENA -- The family of Joseph B. Hull is saddened to report his peaceful passing at his family home on Friday, September 10, 2021 surrounded by his loving family and under the care of Hospice.

The family has entrusted arrangements to the care and direction of the Phillips Memorial Home, Massena. Per Joe’s wishes, there will be no public calling hours or funeral services. A private Celebration of Life will be held by the family at a future date.

Joe was born to the late Obeline (Patnode) and Joseph B. Hull Sr. of Lake Clear, NY on March 29, 1935. He attended Saint Bernard’s School in Saranac Lake, NY and later relocated with his family to Massena during the development of the St. Lawrence Seaway Project. Joe attended Massena Central High School where he was an accomplished baseball, basketball, and football player; received numerous varsity letters; and later was inducted into the Massena Sports Hall of Fame.

He met his future bride in high school and married Betty Olson on August 25, 1962 at the Church of the Sacred Heart by the late Msgr. Rev. John Pendergast.

Joe began working with his father at an early age and learned skills as a carpenter that he would use for the rest of his life. In his later years when his memory began to fade, the recollections that remained the sharpest were the days working side-by-side with his father.

He began his own career with a short stint at ALCOA, but he decided quickly that he didn't want to spend his working years indoors. Instead, he secured employment at Niagara Mohawk, where he worked for the next 36 years, retiring in 1991 as a Chief Line Mechanic.

Joe was a Life Member of the Massena Elks Lodge No. 1702, a communicant of Sacred Heart Church, a past member of the Club 30 hunting camp, and a past member of the Massena Country Club. Joe enjoyed spending time hunting, playing golf, creating homemade furniture, and entertaining family and friends with his ability to tell a good story. Joe's restless nature never went away even after retirement. He often traveled to his children's homes, but only if they had a list of projects for him to tackle—one after another with only a beer break in between.

Joe is survived by his devoted wife Betty of 65 years; and their children, David E. and wife Laura Hull of Saranac Lake, Dori and Jeff Barnard of Watertown, and Linda and Duane Bombard of Canandaigua; along with five grandchildren, Joseph E. Hull, Hannah Barnard, Logan Linch, Eli Bombard, and Phoebe Bombard. Joe is survived by his brother, Edward Hull of Lady Lake, FL; along with nieces and nephews. In addition to his parents, he is predeceased by his brother, Robert Hull and sister-in-law Lynn Hull.

Online condolence and memories of Joe may be shared with the family by visiting www.PhillipsMemorial.com