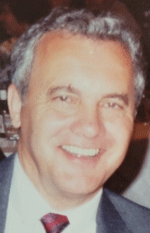 A memorial service will be held privately for the family at Lawrence Funeral Home & Cremation Services, Canton with Kay Church officiating.

He graduated from Vincentia Institute, Albany in 1957 where he joined the Reserves and in 1956 and enlisted in the US Navy after High School serving until 1960.

Upon being honorably discharged from the Navy, John furthered his education and graduated (1962) from Paul Smith’s Arts & Science College with a AA in Forestry; he received his BA in Forestry from Michigan Tech University (1964); and later received his Master’s in Education from St. Lawrence University.

On February 11, 1970 he married Connie Whittaker in the Canton United Methodist Parsonage on a cold day, 20 degrees below zero in fact.

The couple were married 52 years and raised two daughters Laurie and Amy.

Some of John’s memberships include: Pierrepont Volunteer Fire Department, Canton Rotary Club, Brown N Down Hunting Club, Edwards and he was a literacy volunteer for Potsdam Library perfecting English for adults.

Some of his interests and hobbies included: reading, hunting, fishing and traveling to various music venues across the US and Canada.