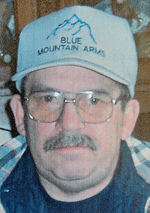 Calling hours will be Wednesday, July 6 from 2:00 to 4:00 PM at Lawrence Funeral Home, Canton. VFW Post #1231 will conduct a service for a fallen comrade and military honors after the service. Additional off-street parking will be available behind "LUNA" at 18 Park Street.

John worked most recently as a mechanic for U-Haul in Canton and was a member of Edward C. Seymour Post #1231 VFW, Canton where he served with the Honor Guard providing over 200 services for North Country Veterans. He also belonged to Robert J. Freego Post #282 in Potsdam. He also enjoyed hunting, fishing, restoring old cars, demolition derbies and racing stock cars at the county fair and area fields days. He was also a NASCAR fan, enjoyed time at his camp and socializing with friends.

Surviving are his wife, Diane of Canton; grandson Ethan Gibbons and son-in-law Scott Gibbons of Canton; a sister Judy (Bill) Murphy of Canton; a brother Robert (Melida) Freego of Theresa; and five nieces and nephews.

John was predeceased by his parents and daughter Susan Freego Gibbons (2020).