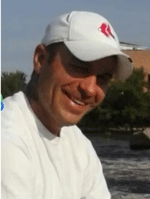 Joey was born on February 27, 1983, in Massena, the son of the late Joel T. Farmer and Helen Marie Enslow.

He attended Massena schools and later achieved his GED. On September 13, 2014, he married JoAnn Kocsis in Massena.

Joey worked in the asbestos abatement business first with OP-Tech and most recently with NRC in Massena.

He greatly enjoyed motorcycles, camping, fishing, cooking and eating, and socializing with his friends.

In addition to his parents, he was predeceased by a brother-in-law, Terry McGregor.

A celebration of his life will be held at a time to be announced.

Arrangements are under the care and guidance of the Donaldson Funeral Home, Massena, where friends may share memories and offer condolences online at www.donaldsonfh.com.

In lieu of flowers, those wishing may consider memorial contributions to be made in his memory to the Massena Humane Society or the American Cancer Society.