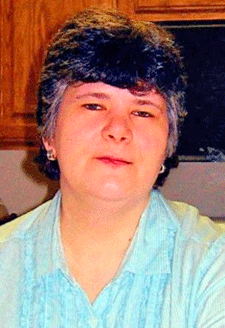 OGDENSBURG -- A funeral mass for Joanne C. Petrie, 54, Ogdensburg, will be held at 2:00pm on Tuesday (Sept 20, 2022) at Notre Dame Church. Burial will follow at Bayside Cemetery in Potsdam.

Calling hours will also be held on Tuesday from 11 a.m. to 1:30 p.m. at the Fox & Murray Funeral Home. Joanne passed away at Claxton Hepburn Medical Center on Friday (Sept 16, 2022) surrounded by her family.

Timmi Lyn (Dominic) Rodriquez and Tiffany Petrie and her companion David Bevins Jr. all of Ogdensburg;

Joanne was born on July 10, 1968 in Ogdensburg, a daughter of Joseph Katura & Frances Dishaw. She attended Ogdensburg Free Academy where she received her G.E.D. and later married Timothy R. Petrie on August 25, 1988. Joanne worked at Stewarts and later as a Certified Nurse's Aid at Cedars Nursing home until becoming disabled. She enjoyed spending time with her grandchildren and watching QVC and HSN and playing games with her family.

Memorial contributions can be made to a charity of one's choice. Condolences and fond memories can also be shared online at www.foxandmurrayfuneralhome.com.