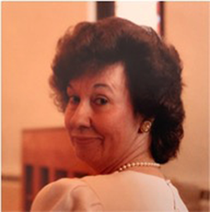 She is survived by her two sons and their wives, James S. and Lucie Bradley of Winthrop, and Mark and Debra Bradley of Gaffney, SC; three daughters and their husbands Kathryn Jenkins and John Jenkins Johnson City, Tenn., Leslie Mitkusevitch of Rockford, IL, Dr.Beth Bradley and Dr.Chris Baker of Kodak, Tenn.; seven grandchildren, Scott and Ryan Jenkins, Sarah, Anna and Laura Bradley, Victoria and Joseph Mitkusevitch.

JoAnn enjoyed international travel with her husband, which included multiple adventures in Central and South America, Western and Eastern Europe, Asia and Australia.

She was a member of the Daughters of the American Revolution.

JoAnn was laid to rest at Andrew Johnson National Cemetery along side her late husband.